The story of Deborah Sampson tells the story of America's birth. She was the descendant of those who sailed the Mayflower, Miles Standish and William Bradford.

Her family settled in Plympton, Massachusetts and suffered the oppression of King George. At the age of ten, Deborah's family was penniless and her mother was forced to sell Deborah and her brothers and sisters into indentured servitude. So at the age of eighteen, when the young woman heard the cry of George Washington, she was prepared to fight and die for her liberty: she dressed as a man and enlisted in the Continental Army. 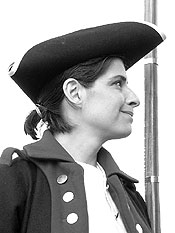